The next person you meet in Heaven / Mitch Albom. 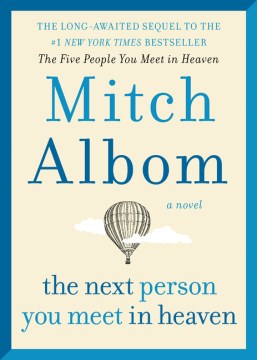 Fifteen years after the publication of his blockbuster best-seller, The Five People You Meet in Heaven? (2003), Albom returns with a sequel set 20-odd years into the future. Annie, the little girl Eddie sacrificed his own life in order to save, has grown up. Life has not been without its struggles for Annie, who was left with both a disability and an overly protective mother after the accident at Ruby Pier Amusement Park. However, things appear to be on the upswing as she reunites with and marries Paolo, her childhood sweetheart. Of course, there are no simplistic, happily-ever-after endings in the Albom universe, and Annie and Paolo prove there are no exceptions to that rule. After a horrific accident on her wedding day, Annie is whisked up to heaven, where she not only meets up with Eddie but also four others whose lives she touched and impacted in meaningful ways. As Annie learns her lessons about the meaning and value of both life and death, Albom wraps up this heartfelt fable with a totally unexpected twist. Order plenty of copies and warn readers to keep their hankies handy! HIGH-DEMAND BACKSTORY: Albom's many-millions-sold hit, The Five People You Meet in Heaven (2003), ensures a large and ready audience for this much-heralded sequel.  Copyright 2018 Booklist Reviews.

Remember little Annie, whose life was saved by war veteran-turned-amusement park mechanic Eddie in Albom's blockbuster The Now, after a terrible accident on her wedding night, she's heaven-bound herself and about to meet the man who died saving her. With a multicity tour.

Annie's life has never been easy, especially after the tragic incident at Ruby Piers amusement park. As a little girl, then as a teen, she struggles with the physical and emotional issues regarding her reattached hand. Annie blames herself for every bad incident in her life. The winds shift as she reconnects with Paulo, her best friend from high school, after years apart. Now Annie and Paulo have just begun a new chapter as a wedded couple. Excitement turns to fear as a terrible tragedy sends them both to the emergency room just hours after the ceremony. When Annie wakes up in heaven, she encounters the five beings that most influenced the course of her life. They skillfully guide her past her self-recriminations to show her the beauty and grace of our interconnected lives. Albom's gift for storytelling continues to shine in this sequel to his best-selling . With true-to-life characters, this quick parable serves as a reminder that through empathy and forgiveness, we can survive our losses. In turn, our troubles are mere beginnings to a future of wonderful possibilities. [See Prepub Alert, 4/23/18.]