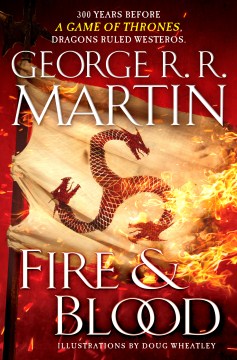 *Starred Review* Martin has done it again. Delving even deeper into the already deeply explored world of the Song of Fire and Ice series (which began with A Game of Thrones?, 1996), he has composed a broad, sweeping exploration of the Targaryens, one of the most prominent families of the Seven Kingdoms. Fire and Blood is a history of the only dragonriders to escape The Doom of Valyria, beginning with King Aegon I and extending to the coming-of-age of Aegon III, some 130 years later. Presented as the transcription of an archmaester's writings, this first volume of the History of House Targaryen of Westeros reads a lot like Thomas B. Costain's Plantagenet histories. Rather than a dry recitation of dates and names, the dragonriders' history is brought to life with carefully chosen facts alongside brief descriptions of conflicting sources and stories where those facts are in dispute. This leads to a beautiful weaving of the wars, marriages, deaths, dragons, and politics that shape the world Martin has created, leaving the reader feeling like this is a true history rather than a piece of fantasy. This is a masterpiece of world-building, with much attention given to intricate details about the colors of the dragons, the clothing people wore on certain memorable occasions, and how the battles they fought played out. The tangled web of intrigues is laid out clearly, noting how each succeeding generation navigated the turbulent political landscape. While not structured like a conventional novel, the book tells a coherent story, and it does not require that the reader have a familiarity with previous books in the Song of Fire and Ice series; on the other hand, the maps found in Martin's nonfiction The World of Ice and Fire (2014) are very helpful when trying to picture where events occurred. Beyond Martin's legions of fans, anyone with a taste for richly, even obsessively detailed historical fiction or fantasy about royalty will enjoy this extraordinary work. HIGH DEMAND BACKSTORY?: It's not the long-awaited sequel to A Dance with Dragons? (2011), but Martin fans who can get over their disappointment will be rewarded with a richer, deeper exploration of the world of Westeros—and this is just volume one. Copyright 2018 Booklist Reviews.