All these beautiful strangers : a novel / Elizabeth Klehfoth. 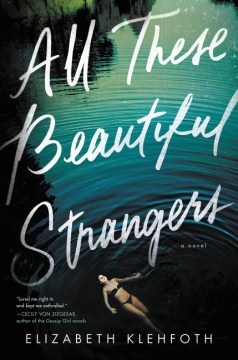 Seventeen-year-old Charlie Calloway seems to have it all: a wealthy family, a spot in prestigious Knollwood Prep, where she is admired by one of the most popular guys in school, and now the chance at an exclusive secret society when the "A's" send her an invitation to join their initiation process. The only thing missing from Charlie's life is her mother, Grace, who mysteriously disappeared 10 years before. Although it appears that Grace abandoned her family, absconding with a small fortune from her husband's bank account, a part of Charlie always wonders: did her mom really run away, or was it something (or someone) else that caused her disappearance? This debut mystery gives readers a fun glimpse into the scandalous world of high-society boarding school and is reminiscent of Curtis Sittenfeld's Prep (2005). The plot moves back and forth between time periods and points of view, as Charlie's current experiences begin to unearth more about her mother's disappearance. Soon Charlie must choose between the expectations of her highbrow family and classmates and the truth. Copyright 2018 Booklist Reviews.

Optioned for television by Bruna Papandrea's Made Up Stories (e.g., ), this white knuckler from a and AWP Intro Award finalist features teenage Charlie, still haunted by her mother's disappearance when she was seven. Now a secret society at her elite New England school wants her to join their fun, but doing so entails a creepy, semester-long scavenger hunt that could wreck her life. YA crossover potential.

Charlie Calloway comes from a well-to-do family with a mysterious past. Her mother vanished when Charlie was seven, and while the details are unclear, everyone—including Charlie's father—assumes Grace simply picked up and left, though Charlie has trouble believing her mother would abandon her. Ten years later, 17-year-old Charlie receives an invitation to join the A's, an exclusive and secretive club made up of popular students from her New England private school. To join this club, however, she must pass a series of questionable tests that challenge her moral compass, though Charlie's budding interest in Dalton, a club member with an unsavory reputation, keeps her motivated to succeed. Along the way, Charlie continues to hunt for answers surrounding her mother's disappearance, and while she starts to discover more about herself in the process, she stumbles upon dark secrets that hit close to home. A worthy, page-turning debut that will keep readers guessing until the end. Readers of Liane Moriarty and psychological thrillers will not want to put this down.

Did Grace Fairchild simply walk away from her Cinderella life as the wife of a blueblood New York real estate billionaire—as suggested by bank surveillance footage showing her cleaning out the couple's safe deposit boxes days before she disappeared—or did something more sinister happen? A decade later, the question haunts Grace's 17-year-old daughter, Charlie, the appealingly acerbic narrator of Klehfoth's engrossing if flawed debut. Now a junior at Knollwood Augustus Prep, the New Hampshire boarding school her father attended, whip-smart Charlie is beginning the pledging process for an ultra-exclusive secret society, the A's. As the high-stakes initiation game tests Charlie's loyalties and values, she discovers some explosive family history—challenging almost everything she has grown up believing about her parents. Unfortunately, the author's plotting fails to measure up to her ingenious amateur sleuth, relying throughout on colossal coincidences and ending with a denouement that's surprising primarily for its implausibility. Still, Klehfoth's ability to draw in the reader shows that she's an author to watch.