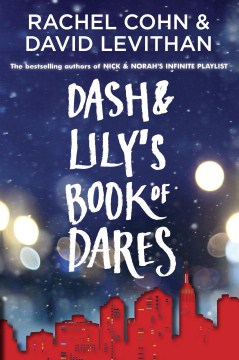 In their third collaboration, Cohn and Levithan present another clever New York romance. Levithan writes the chapters narrated by Dash, a "bookish" 16-year-old spending Christmas break alone. He finds a red moleskin notebook amid the shelves of the Strand bookstore. "Are you going to be playing for the pure thrill of unreluctant desire?" asks Cohn's Lily in the first coded message of the notebook, with an invitation to respond. Lily is aglow with the yuletide and devastated that her parents are spending the holidays in Fiji. Armed with anonymity, Dash and Lily exchange the notebook in various locations around the Big Apple, filling it with their greatest hopes and deepest fears, and ultimately find themselves falling in love. Not surprisingly, the young pair's perceptions of each other don't entirely reflect reality; Dash's ex asks if he is in love with the girl writing in the book or the girl he is picturing in his head. The spirit of the season amplifies Dash and Lily's loneliness and heightens the connection between them, in another surefire hit from the creators of Nick and Norah's Infinite Playlist (2006). Copyright 2010 Booklist Reviews.

It's Christmastime, and sixteen-year-old Dash is in a very bah-humbug mood. His day brightens when he discovers a notebook with a tempting "DO YOU DARE?" title. Dash and Lily, the book's owner, swap the journal (and narration) back and forth for an "epistolary flirtation." Cohn and Levithan's talent for creating authentic teenage characters in all their messy glory is proven once again. Copyright 2011 Horn Book Guide Reviews.

Cohn and Levithan (Nick & Norah's Infinite Playlist, 2006; Naomi and Ely's No Kiss List, 2007) return with another whip-smart novel about New York City teens navigating the big R: relationships. Here, the setting is Christmastime, and the 'moo-like crowds, the endless visits from hapless relatives, the ersatz cheer' have sixteen-year-old Dash in a very bah-humbug mood. But his day brightens when he discovers a red Moleskine notebook, with its tempting 'DO YOU DARE?' title, at the Strand bookstore. After racing through the journal's literary scavenger hunt, he leaves an anonymous clue to encourage the notebook's owner, Lily, to continue the game. As Lily takes over the narration, her first words ('I love Christmas. I love everything about it: the lights, the cheer, the big family gatherings') reveal that she and 'Nameless He of the Notebook Game' aren't exactly on the same page. But as Dash and Lily swap the journal back and forth, sharing their innermost thoughts and challenging each other with solo adventures in the city, their 'epistolary flirtation' seems to have possibilities for something more. Cohn and Levithan's ending includes one too many Hollywood-esque ingredients (an out-of-control bullmastiff, a baby launched into midair, a vigilante mothers' group, a first date in a police interrogation room), but their talent for creating authentic teenage characters in all their messy glory is proven once again. TANYA D. AUGER Copyright 2011 Horn Book Magazine Reviews.

Cohn and Levithan use a familiar but fun formula for this holiday-themed collaboration--think Saint Nick & Norah--mixing an enticing premise with offbeat characters and some introspective soul searching. Two New York City teens left alone for Christmas "meet" when Dash discovers Lily's cryptic notebook wedged between J.D. Salinger books at the Strand. Its clues lead him on a treasure hunt through the bookstore; he responds with his own clues, and soon they are using the notebook to send each other on adventures across the city and to trade their "innermost feelings and thoughts." Fans will enjoy the zingy descriptions and characterizations that populate this Big Apple romp (at one point, Dash must reach inside the coat of the Macy's Santa to retrieve Lily's message; later, he sends her to go see a "gay Jewish dancepop/indie/punk band called Silly Rabbi, Tricks Are for Yids"). Readers will be ready for the real romance to start long before the inevitable conclusion, but as with this duo's past books, there are more than enough amusing turns of phrase and zigzag plot twists to keep their attention. Ages 12–up. (Oct.)

The year of secret assignmentsMoriarty, Jaclyn

To all the boys I've loved beforeHan, Jenny

Why we broke upHandler, Daniel

What my mother doesn't knowSones, Sonya