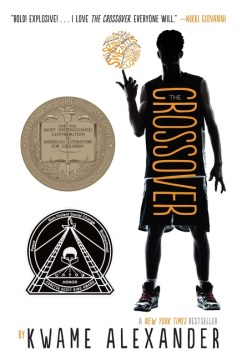 The Bell twins are stars on the basketball court and comrades in life. While there are some differences—Josh shaves his head and Jordan loves his locks—both twins adhere to the Bell basketball rules: In this game of life, your family is the court, and the ball is your heart. With a former professional basketball player dad and an assistant principal mom, there is an intensely strong home front supporting sports and education in equal measures. When life intervenes in the form of a hot new girl, the balance shifts and growing apart proves painful. An accomplished author and poet, Alexander eloquently mashes up concrete poetry, hip-hop, a love of jazz, and a thriving family bond. The effect is poetry in motion. It is a rare verse novel that is fundamentally poetic rather than using this writing trend as a device. There is also a quirky vocabulary element that adds a fun intellectual note to the narrative. This may be just the right book for those hard-to-match youth who live for sports or music or both. Copyright 2014 Booklist Reviews.

Twelve-year-old twins Josh and Jordan (JB) are a well-oiled machine on the basketball court. But then JB gets a girlfriend, and before Josh knows it, things start to change. Josh's narration is a combination of exciting play-by-play game details, insightful observations on middle school, and poignant meditations on sibling dynamics and familial love. This verse novel has massive appeal for reluctant readers.

Josh and Jordan (JB), identical twin sons of former basketball phenom Chuck "Da Man" Bell, are ball legends themselves, and they aren't yet thirteen; Josh is the only middle schooler around who can dunk, JB has a mean three-point shot, and together they're a well-oiled machine on the court. But then things start to change, as they tend to do at their age: JB gets a girlfriend, and before Josh knows it, their relationship is strained to the point of a mid-game altercation that lands him benched for weeks. On top of that, their mother frets constantly over Dad's poor health, and the boys begin to worry, too. Josh's first-person verse narration is a combination of exciting play-by-play game details, insightful middle-school observations, and poignant meditations on sibling dynamics and familial love. Since poet Alexander has the swagger and cool confidence of a star player and the finesse of a perfectly in-control ball-handler, wordplay and alliteration roll out like hip-hop lyrics, and the use of concrete forms and playful font changes keep things dynamic: "SWOOP in / to the finish with a fierce finger roll… / Straight in the hole: / Swoooooooooooosh." Alexander brings the novel-in-verse format to a fresh audience with this massively appealing package for reluctant readers, athletes especially. katrina hedee Copyright 2014 Horn Book Magazine.

Josh Bell, known on and off the court by the nickname Filthy McNasty, doesn't lack self-confidence, but neither does he lack the skills to back up his own mental in-game commentary: "I rise like a Learjet—/ seventh-graders aren't supposed to dunk./ But guess what?/ I snatch the ball out of the air and/ SLAM!/ YAM! IN YOUR MUG!" Josh is sure that he and his twin brother, JB, are going pro, following in the footsteps of their father, who played professional ball in Europe. But Alexander (He Said, She Said) drops hints that Josh's trajectory may be headed back toward Earth: his relationship with JB is strained by a new girl at school, and the boys' father health is in increasingly shaky territory. The poems dodge and weave with the speed of a point guard driving for the basket, mixing basketball action with vocabulary-themed poems, newspaper clippings, and Josh's sincere first-person accounts that swing from moments of swagger-worthy triumph to profound pain. This verse novel delivers a real emotional punch before the final buzzer. Ages 9–12. Agent: East West Literary Agency. (Mar.)

Sasquatch in the paintAbdul-Jabbar, Kareem, 1947-