Pilgrim's wilderness : a true story of faith and madness on the Alaska Frontier / Tom Kizzia. 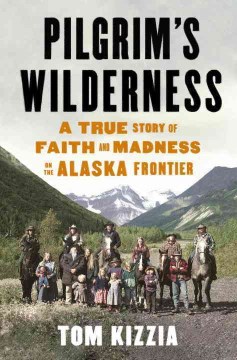 This strong work of reportage starts in 2002, when Papa Pilgrim, his wife, and 14 kids buy a 420-acre mining claim embedded in Alaska's Wrangell–St. Elias National Park. Papa bulldozes a 13-mile road through the park to tiny McCarthy, and land-rights groups stick with the Pilgrims even when it is revealed that Papa is Robert Hale, born and raised in upper-class Fort Worth. Hale was the only witness when his pregnant high-school girlfriend, daughter of future governor John Connally, shot herself in the back of the head with a fingerprint-free shotgun. Hale's life brimmed with bizarre murkiness—named in an FBI file on JFK; his mother helping Lee Harvey Oswald get work; squatting for 20 years on Jack Nicholson's New Mexico ranch; and hints of a dinner with Charles Manson. In Alaska, it turns out that for decades Hale has used physical, mental, and sexual abuse to brainwash his whole family. His intriguing past crumbles in comparison to his excruciating cruelty and to the inspiring grace and strength of his children. Copyright 2013 Booklist Reviews.

In 2002, when the Pilgrim family, a curious group that included a husband and wife and 14 children, showed up in remote McCarthy, Ala., and homesteaded in Wrangell-St. Elias National Park, their pioneer spirit, independent nature, religious piety, and throwback ideals were embraced by the frontier community. When the family got into a legal battle with the National Park Service, many Alaskans who bristled at the government's perceived infringement on landowners' rights came to the family's aid. But when journalist Kizzia (The Wake of the Unseen Object) started digging into the Pilgrims'' past—especially that of the father, Papa Pilgrim (aka Bobby Hale)—for the Anchorage Daily News, he uncovered a bizarre saga. Following Hale's journey from Texas to Alaska, which included stops in Florida, California, Oregon, and New Mexico—and names like John F. Kennedy, Jack Nicholson, J. Edgar Hoover, and Texas Governor John Connally—Kizzia discovers cracks in the paradisiac image the Pilgrim's presented to the public. Though it takes a little while for him to set up the story, once Papa Pilgrim's dark secrets start to become exposed (there are battles between the National Park Service, the government and various small towns), the author sends readers on a roller-coaster ride that is as thrilling as it is shocking. Kizzia's work is a testament to both the cruelty and resiliency of the human spirit, capturing the sort of life-and-death struggle that can only occur on the fringes of modern-day civilization. Agent: Alice Martell, the Martell Agency. B&w photos. (July)

In the name of God: the true story of the fight to save children from faith-healing homicideStauth, Cameron

I'll be gone in the dark: one woman's obsessive search for the Golden State KillerMcNamara, Michelle, 1970-2016

If you tell: a true story of murder, family secrets, and the unbreakable bond of sisterhoodOlsen, Gregg

The Manson women and me: monsters, morality, and murderMeredith, Nikki

For Laci: a mother's story of love, loss & justiceRocha, Sharon

A silence of mockingbirds: the memoir of a murderZacharias, Karen Spears

While they slept: an inquiry into the murder of a familyHarrison, Kathryn